It has been the endeavour of the government to provide all our athletes with the best of support, especially our divyang athletes: Shri Anurag Singh Thakur

Union Minister of Youth Affairs and Sports Shri Anurag Singh Thakur felicitated the Indian Blind Cricket Team following their arrival in the national capital on Monday. The team won the T20 World Cup for the Blind for the 3rd consecutive time last Saturday after getting past Bangladesh emphatically at the Chinnaswamy Stadium, Bengaluru.

The Union Minister was joined by Minister of State for Youth Affairs and Sports, Shri Nisith Pramanik, Mahantesh GK, President, of the Cricket Association for the Blind (CABI) as well as other dignitaries from the Department of Sports, MYAS, CABI and the Sports Authority of India.

Addressing the gathering, Shri Anurag Thakur mentioned, “It has been the endeavour of the government, under the leadership of Prime Minister Shri Narendra Modi ji to provide all our athletes with the best of support, especially our divyang athletes. I assure all support to the members of the team even more and address various challenges coming their way.”

Indian Blind cricket team skipper Ajay Kumar Reddy, whose team beat Bangladesh in the final on Saturday by 120 runs, mentioned, “The constant support from the Union Sports Ministry encourages us to perform with far more intent. There is tremendous hard work behind winning and lots of hurdles. However, after going on the ground, we don’t think about anything but our Indian flag. Not our obstacles. We have won 5 World Cups now and are confident to win more.” 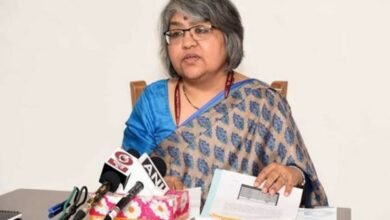