The Prime Minister, Shri Narendra Modi has paid homage to Dr Babasaheb Ambedkar on Mahaparinirvan Diwas and recalled his exemplary service to our nation.

“On Mahaparinirvan Diwas, I pay homage to Dr. Babasaheb Ambedkar and recall his exemplary service to our nation. His struggles gave hope to millions and his efforts to give India such an extensive Constitution can never be forgotten.”

India must strive to become the global capital of millets: Shri Piyush Goyal 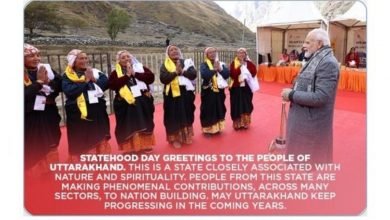 PM greets the people of Uttarakhand on their statehood day