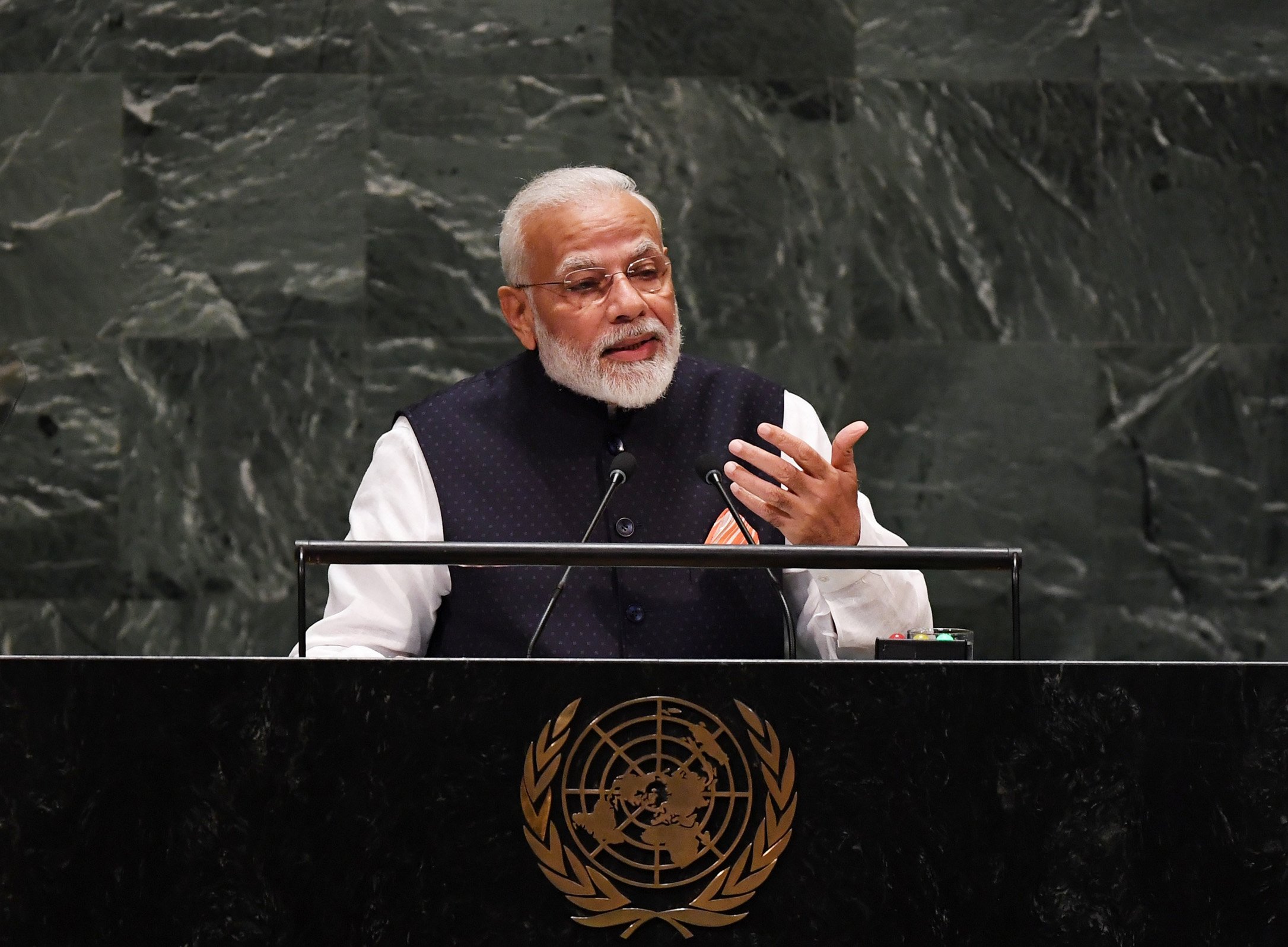 Evoking Mahatma Gandhi, Prime Minister said that Gandhiji’s message of truth and non-violence is relevant even today for peace, progress and development of the world.

Prime Minister highlighted the huge transformation brought about by the pro–people initiatives of the Government like Swachh Bharat, Ayushman Bharat, Jan Dhan Yojana and Digital identification (Aadhar). He added that when India pursues such initiatives, it instills hope in the entire world.

Prime Minister mentioned about India’s commitment towards eliminating single use plastic. He spoke about the government’s commitment to provide water to every household, a house for every family and elimination of tuberculosis in the coming five years.

Emphasizing on Indian culture, Prime Minister said public welfare is part of our cultural ethos. He said that public welfare through public participation is the mantra of his government.

Terming terrorism as the biggest challenge for the world, Prime Minister urged all the nations to unite against terrorism for the sake of humanity. “India is a country that has given the world, not war, but Buddha’s message of peace,” the PM said. He also mentioned about India’s contribution to the United Nation peacekeeping Mission

Prime Minister urged the international community to give a new direction to multilateralism. He said as the world is going through a new era, the countries do not have the option to confine themselves within their boundaries. “A divided world is in no one’s interest. We must give a thrust to multilateralism and reforming the United Nations,” the PM said.

Prime Minister invoked the quotes of Tamil philosopher Kaniyan Pungundranar and Swami Vivekananda to seek collective action to address various global challenges. He said that ‘Harmony and Peace’ is the message of the world’s largest democracy to the rest of the world.

Speaking about global warming, Prime Minister said that even though India’s contribution towards global warming in terms of per-capita emissions is very low, India is at the forefront of the response against it. In this context, he elaborated on the steps taken by his government to fight climate change, including the 450 GW of renewable energy target and the formation of International Solar Alliance.

India has given the world not ‘Yudh’ but ‘Budh’: PM ⁦@narendramodi⁩ at UNGA on terrorismhttps://economictimes.indiatimes.com/news/defence/india-has-given-the-world-not-yudh-but-budh-pm-modi-at-unga-on-terrorism/videoshow/71340712.cms …

It is absolutely imperative that world unites against terrorism: PM ⁦@narendramodi⁩ at UNGAhttps://www.livemint.com/news/india/pm-narendra-modi-address-un-general-assembly-in-new-york-live-updates-imran-khan-1569592148047.html …