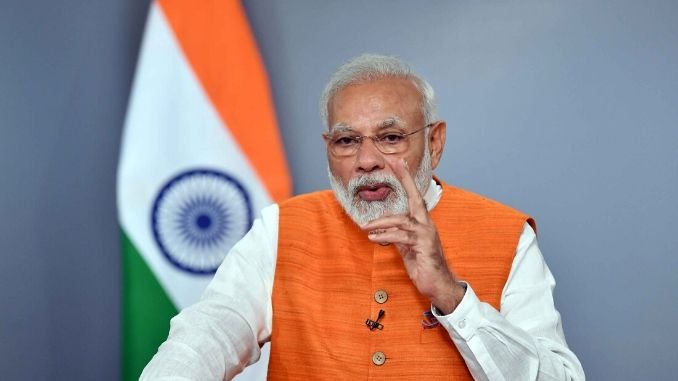 Says Compassion Harmony, Justice, Service and Openness are the Ideals on which Indian values are based

Prime Minister Shri Narendra Modi today unveiled a life-size statue of Swami Vivekananda at IIM Kozhikode through video conference. He was participating in the international conclave on “Global Indian Thought” that is being organised by IIM Kozhikode.

Addressing the gathering the Prime Minister said, “Indian thought is vibrant and diverse. It is constant and evolving. It is too vast to be put in a lecture or a seminar or even books. But, broadly, there are certain ideals that have remained central to Indian values. They are- compassion, harmony, justice, service and openness”.

Referring to what draws the world to India, the Prime Minister said, “First and foremost, what comes to the mind is- the virtues of peace, unity and brotherhood. “

He said because of harmony and peace our civilization prospered and survived where many have failed.

He said our strengths is that our thoughts have become living traditions guided by simplified and relatable practices. “These practices are neither rigid nor unidimensional. Their beauty lies in the fact that they can be practised differently,” he said.

He said India is the land that gave vibrant faiths such as Hinduism, Buddhism, Jainism and Sikhism. “In this land, the Sufism flourished”, he said.

Saying that Non-Violence is at the core of all these, he said Mahatma Gandhi “championed these ideals” that led to India’s freedom. “The Indian way of conflict avoidance is not by brute force but the power of dialogue,” he said.

“When I say India believes in peace and harmony, this includes harmony with Mother Nature and our environment, “he said. PM said the traces of this spirit can be seen in several steps being taken now.

He said India led the world in forming the “International Solar Alliance, to harness solar energy for a cleaner tomorrow.”

Prime Minister said in the last 5 years 36 Crore LED bulbs were distributed and over 1 Crore Street lights replaced with LED making a saving of Rs 25000 Crore and reducing CO2 emissions by 4 Crore Tonnes.

Protecting the Tiger and the Lion

Prime Minister also pointed out that the country’s forest cover is growing.

Prime Minister said, “One of the most remarkable aspects of this land is the respect, importance and dignity given to women. Women are the manifestation of divinity.”

Prime Minister said the Indian constitution gave voting rights to women from the very first day even as western countries took centuries to do so.

He said, “today, more than seventy per cent of Mudra loan beneficiaries are women.

Women are making an active contribution to our armed forces. A group of women navy officers went around the entire world by sea! That was historic. India has the highest number of women MPs today. Women turnout in the 2019 Lok Sabha polls was highest”.

Prime Minister said that India celebrates openness. Where there is openness, respect for different opinions, innovation is natural. The innovative zeal of Indians is drawing the world to India. He said that Indian thought has given a lot to the world and has the potential to contribute even more. It has the potential to solve some of the most leading challenges our planet faces, he concluded.