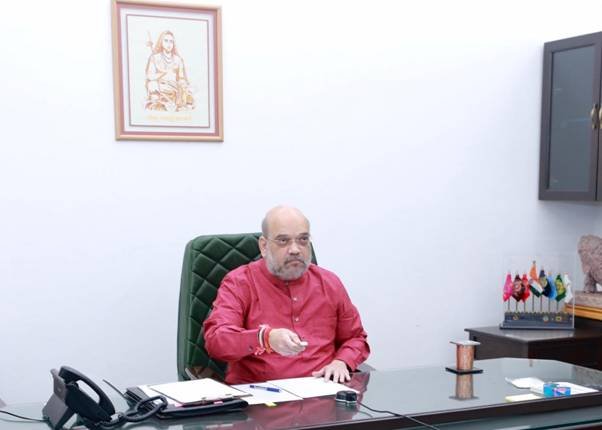 December 1,2020; (Delhi): Union Home Minister Shri Amit Shah inaugurated two flyover bridges in his Parliamentary constituency Gandhinagar through video conferencing from New Delhi today. The Chief Minister of Gujarat Shri Vijay Rupani, Deputy Chief Minister Shri Nitin Patel and other dignitaries attended the event held in Ahmedabad. The first flyover bridge which is 245 meters in length and has cost Rs. 35 crore has been built on the Sindhu Bhawan Cross Road. An expenditure of Rs. 36 crore has been incurred on the second flyover bridge, constructed over Sanand Junction.

Speaking on the occasion, Shri Amit Shah said seven more flyovers would soon be built on the Sarkhej-Gandhinagar-Chiloda National Highway to reduce traffic load. He said the 50 kilometre route between Sarkhej to Chiloda will have uninterrupted traffic, and this will be a unique stretch of its kind in the country. The Union Home Minister also expressed gratitude for the cooperation given by the state government to complete the projects ahead of time.

Expressing satisfaction, the Union Home Minister said even during the biggest Corona crisis, development work in the country has not stopped. Shri Shah said while the global economy has suffered due to the Corona crisis, on the other hand due to the tireless efforts of the Modi Government, the Indian economy will soon be back on track. The Central government has used the time of the Corona crisis to bring in far reaching reforms in industrial policy, education policy, and other important policy reforms in the social sector. Shri Amit Shah appreciated the efforts of the Government of Gujarat in maintaining the pace of development despite the economy being affected by the Corona pandemic.