The Finance Minister Smt. Nirmala Sitharaman also announced a number of new schemes and initiatives for Jammu & Kashmir which included the launch of the Tejasvini & Hausala schemes of J&K Bank, Shikhar & Shikara schemes of Punjab National Bank (PNB) and SIDBI cluster development fund for Rs. 200 crores. Tejasvini scheme focuses on providing financial assistance of Rs. 5 lakh to girls between 18-35 years for starting their business. Shikhar scheme focuses on meeting credit requirements up to Rs. 2 crores for the hotel, tour & tourism industry. Under the Shikara scheme credit up to Rs. 15 lakh for purchase/repair of Shikaras is provided in Kashmir valley.

Smt. Sitharaman also laid the foundation stone for Rural Self-employment Training Institutes (RSETI) building at Shopian & Baramula and inaugurated J&K bank branches of Salal, Bagga & Budhan in Reasi district. Under the aegis of NABARD, registration certificates to 5 FPOs were handed over and also sanction letter of rural mart to Asha SHG was handed over.

Smt. Sitharaman attended a number of events organized by the Banker’s Committee of the Jammu & Kashmir Union Territory (UTLBC of J&K) at the General Zorawar Singh Auditorium Complex, University of Jammu, here today. The event was attended by Lieutenant Governor of Jammu & Kashmir, Shri Manoj Sinha along with a number of senior officials from the Department of Financial Services, the Government of India, and senior officials of the Jammu & Kashmir administration. Chief Secretary of Jammu & Kashmir gave a welcome address and apprised the gathering about the efforts being made by the UT administration for the economic development of the region.

For FY 2020-21, it was announced that NABARD for UT of Jammu & Kashmir is increasing its commitment under Rural Infrastructure Development Fund (RIDF) from Rs. 787 crore to Rs. 1,500 crore which will help in the creation of rural infrastructure for faster economic growth. To further accelerate economic growth, banks will also increase their ground-level credit in Jammu & Kashmir for the previous year level of Rs. 14,735 crore to Rs. 16,000 crore in the current Financial Year.

The Finance Minister visited a number of put up by beneficiaries from J&K Bank, SBI, PNB, J&K Grameen Bank and NABARD among others. Smt. Nirmala Sitharaman interacted with the beneficiaries and enquired about the transformative effect the bank credit has made in their entrepreneurial journey. The Finance Minister also showed a keen interest in the products made by the entrepreneurs. 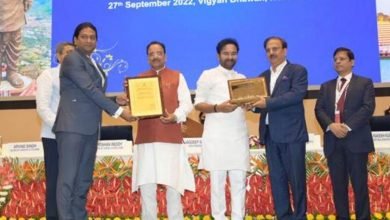 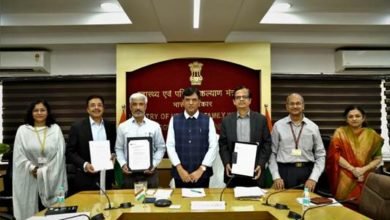