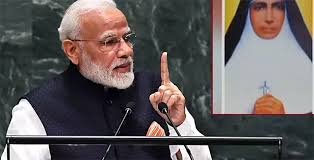 Congregation of the Holy Family has thanked Prime Minister Narendra Modi for his appreciation of the Canonization of Bl. Mother Mariam Thresia, the patroness of families through his programme ‘Mann Ki Baat’.

“May I, Sr. Udaya CHF, Superior General of the Congregation of the Holy Family take this opportunity to thank you most sincerely for the appreciation of the Canonization of Bl. Mother Mariam Thresia, the patroness of families through the programme ‘Mann Ki Baat’. She was a person with vision, a saintly woman, a great mystic who fulfilled her mission struggling through varied difficulties. You have expressed very clearly your whole hearted appreciation towards the new Indian Saint Mariam Thresia who worked very hard for the upliftment of the families by imparting the love and peace to the families around and also through education. Thus she had contributed a lot in the Nation Building.Your Excellency, Modiji, your appreciation message through ‘Mann Ki Baat’ was very touching and it was appreciated by everybody in our Congregation and people in and around”, writes the Congregation of the Holy Family in a letter to the PM.

In his monthly radio  programme ‘Mann Ki Baat’ Prime Minister Narendra Modi expressed happiness over the canonisation of Mariam Thresia saying, “It is a matter of pride for every Indian that on the coming October 13 his holiness Pope Francis will declare sister Mariam Thresia a saint.  I pay heartfelt tributes to sister Mariam Thresia and congratulate the citizens of India, and especially our Christian brothers and sisters for this achievement.”