KLIP is by far the first of its kind and the largest lift scheme in the world. The project requires 7152 MW of electricity for the Package-8 pumping station to pump 3 TMCs of water daily. It is constructed 330 meters below the ground and is the only one consisting of such a gigantic underground pumping station with 7 units, each having a capacity of 139 MWs.

MEIL, India’s leading infrastructure company has completed the construction of the world’s biggest engineering marvel, the largest lift irrigation scheme namely the Kaleshwaram Lift Irrigation. It is going to be inaugurated on 21st June. Megha Engineering and Infrastructure Limited (MEIL) has completed the project on a FastTrack mode and the construction has been completed in record time. All the civil and electro-mechanical works in Medigadda to Mid-Maneru link-1 and link-2 has been completed.

Leading the industry with decades of experience, the company installing 105 Machines out of 120 machines and constructing 17 pump houses out of 20 in entire KLIP. Medigadda, Annaram, Sundilla (link 1) pumphouses along with the world’s biggest pumphouse at Lakshmipur (Package 8 in link 2) are ready for pumping water. This prestigious Kaleshwaram Lift Irrigation (KLIP) Project would cater irrigation water to 37.08 lakh acres of land; another 18.82 lakh acres of command area will be stabilized with it.

On asking about this achievement,, Mr B Srinivas Reddy, Director, MEIL, said,” It has a privilege and lifetime opportunity to be able to bring the plan from print to reality. We have successfully engineered the world’s biggest pumping scheme in India. To achieve that, we used world-class technology involving the best agencies that have delivered quality. We at MEIL believe that quality and timely delivery of projects are the benchmarks to our success.”

“This is by far the first of its kind and the largest lift scheme in the world. The project requires 7152 MW of electricity to pump 3 TMCs of water daily. In the first phase, 4992 MWs of electricity is being used for pumping 2 TMCs of water.  MEIL has proven its strength in diverse forte – from the construction of major pump houses and power transmission infrastructure through to and civil and electro-mechanical engineering works at their best for pumping water this season,” he added.

KLIP Has Been Completed By MEIL In 2 Years

Till date, the biggest lift schemes in the world were The Colorado lift scheme in America and the Great Manmade River in Egypt. The capacities of these schemes are in horsepower and they took over 3 decades for completion. Now, the Kaleshwaram Lift Irrigation project, an Indian Lift Scheme has become the world’s biggest in terms of capacities. Many other lift irrigation projects have also been completed and maintained by MEIL across India. The Pattiseema project in record-breaking time and got a place in “Limca Book of World Records” for that achievement. It also completed Handri-Neeva lift scheme in 2012 and maintaining it without any single problem ever since.

The Package-8 pumping station can lift 3 TMCs of water per day. It is constructed 330 meters below the ground and is the only one consisting of such a gigantic underground pumping station with 7 units, each having a capacity of 139 MWs.

The depth of the pumping station was calculated based on various technical and scientific parameters. The machines supplied by BHEL are developed with robust engineering and computational fluid dynamics (CFD) technology which helps in overcoming even complex situations.

“The uniqueness of this pump house lies in its twin tunnels, which have been constructed side by side by excavating the earth with a diameter of 10.5 meters, each having a length of 4133 meters. Surge pool and additional surge pools of this pump house are also the biggest in the world. This is the first time such constructions have been made under the ground. One can imagine the size of the Pump House that has 330 Mts depth, 25 Mts width and 65 Mts of height,” said Mr Srinivas Reddy.

KLIP Has A Unique Power Infrastructure

Nearly 7152 MWs of electricity is required for lifting 3 TMCs of water per day. This equals the total demand/consumption of electricity in most Indian states. MEIL completed construction of electrical infrastructure for KLIP with 3057 MWs capacity that includes six 400KVand 220KV  substations, transformers and 260 kilometres of transmission lines, 7 KMs of 400 KV XLPE under Ground Cable etc.  This huge electrical infrastructure has been established for providing drinking water and irrigation purposes in the world. 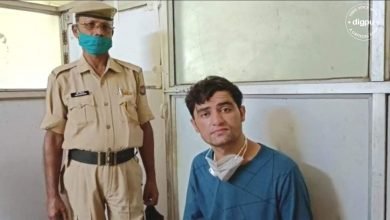 Afghan national arrested in Assam on suspicion of fake documents