Prithvi Shaw registered his fourth century in the ongoing edition of the Vijay Hazare Trophy and became the leading run-scorer in the ongoing tournament.

Prithvi Shaw scored a century while playing for Mumbai in the second semi-final against Karnataka here at the Palam A Stadium. The right-handed batsman brought up his hundred off just 79 balls in the semi-final against Karnataka with the help of 12 fours and 3 sixes. The 21-year-old Shaw went on to play a knock of 165 runs off just 122 balls with the help of 17 fours and 7 sixes.
Prithvi Shaw has taken his tally to 754 runs in the tournament and as a result, he has become the leading run-scorer.

Shaw has led Mumbai in three games in the tournament and in these three games, Shaw returned with one double-century and two tons.
Earlier this week, Shaw broke Mahendra Singh Dhoni and Virat Kohli’s record of the highest individual score by an Indian batsman in a List A chase. Prithvi achieved the feat when he hammered an unbeaten 185 off 123 balls against Saurashtra in the ongoing Vijay Hazare Trophy on Tuesday.

While Dhoni had smashed a whirlwind unbeaten 183 against Sri Lanka in Jaipur in 2005, Kohli had hit 183 to steer India to a six-wicket win over Pakistan in the Asia Cup clash in Dhaka in 2012.
Prithvi surpassed both Dhoni and Kohli’s score while guiding Mumbai into the semi-finals. 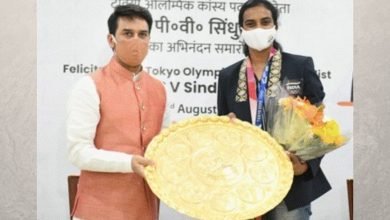